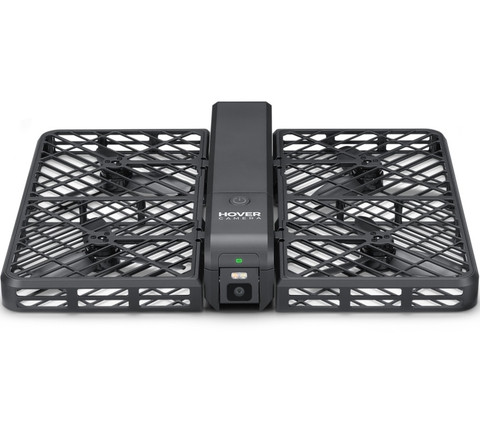 Become your own self-flying personal photographer with the Hover Camera Passport drone and watch the live feed on your iPhone or iPad. This flying camera follows you mid-air, always keeping you in the shot, while capturing breathtaking perspectives in 4K video and 13MP photos. Hover Camera Passport is easy to fly, safe and truly portable. Simply open the box, unfold it and start flying. And when you’re done, quickly fold up the drone and tuck it away in your bag as you head off on your next adventure.

Your own dedicated photographer

Once in the air, Hover Camera Passport automatically finds and follows you (its owner), while recording your everyday life from a completely new angle. It’s all possible thanks to advanced artificial intelligence facial recognition algorithms.

Stylishly compact and lightweight, Hover Camera Passport goes wherever you do. It folds to the size of a small notebook, so you can easily slip it into your bag or clutch.

Fly safely indoors or out

Whether you’re grabbing or releasing the drone, the durable carbon-fibre enclosure protects your fingers. Hover Camera Passport’s unique design conceals the propellers. Plus the intuitive iOS app lets you use your iPhone or iPad to manually control the camera while in mid-air, no matter whether you’re walking down the street or celebrating a birthday in your living room.

In addition to keeping you in every frame, Hover Camera Passport camera also gives you the choice of capturing the moment in up to Ultra-HD video or superb 13MP photos. Plus you can see all the action in real time via the iOS app on your iPhone or iPad.

Access and activate a suite of preset filming modes in the Hover Camera iOS app to get the perfect shot. For example, choose “Orbit”, a shot that circles around you while recording; “360 Spin”, a 360-degree panoramic video; or “Body-Tracking”, which keeps your full body in the frame as you’re filming a run or walk.

Immediately share your HD videos or photos with friends and family. Just download everything to the Hover Camera iOS app (and iOS Albums) and showcase your one-of-a-kind memories on social media.